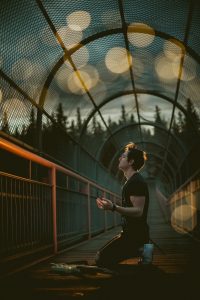 A looper records sounds in real-time and plays back melodies and rhythms using instruments and their voice.

Paul graduated from MacEwan University with diplomas in both Composition and Drum Set Performance thus has the unique ability to combine complex rhythms with melody and harmony resulting in a sound close to that of a full band.

Besides playing weddings, corporate functions and clubs all over North America, Paul has played many fundraisers for the likes of hockey great, Glen Sather, and Dragons’ Den star, Brett Wilson. He’s also worked with the E Power Anti-Bullying Campaign which tours schools across Canada as well as with the Robb Nash Project super shows and school tours. To share his passion for people, Paul has participated in various youth empowerment benefit concerts and spent time in China in November 2017 with We Stand, a youth leadership summit. Lastly, Paul is part of the Edmonton United Way Campaign having co-written and participated in their popular 2016 campaign video. Paul’s passion is music and that passion is fueled by his love for people. Paul wants to inspire and be a positive role model for people of all ages.

His desire is to help them see that dreams are achievable if you work hard and keep striving!